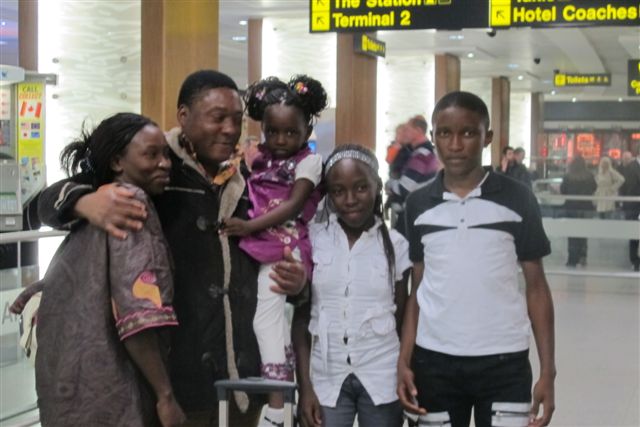 Romain, a nurse, came to the UK five years ago having being persecuted by the government in his home country, the Democratic Republic of Congo. He was forced to leave behind his wife and three children and fly to the UK. It took four years until his application for asylum was approved and he was then able to apply for visas for his family to come and join him.

Whilst he was separated from his family it was difficult for them to keep in touch and he was worried a lot about their safety back home. Romain had been attending the Freedom from Torture North West for weekly psychological therapy.

Six months later the visas were received and Romain was referred to the Refugee Welcome Trust by Freedom from Torture. We met with Romain to start making travel arrangements for his family. We were able to ensure that his family could travel with a French speaking airline and arrange a slightly longer transit for them to negotiate Brussels airport.

The overnight flight arrived first thing and we were able to be there with Romain to greet his family. Romain was it was very good to see his family after so long and he was ‘very very happy for a long while and still am.’ He was also relieved that it all happened so quickly.

His family are now getting used to life in the UK ‘bit by bit’ and are ‘happy and enjoying peace.’ When asked about his plans for the future Romain is focused on looking after his children, bringing them up to have a good education and getting a job in the UK.